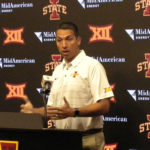 The Iowa State Cyclones return to practice on Friday to begin preparations for the December 28th Camping World Bowl. The Cyclones will play 14th ranked Notre Dame in Orlando.

ISU coach Matt Campbell says the bowl practices have added benefit for the young players who are expected to have a larger role next season.

“When you talk about true freshmen playing not as much of that occurred as much as years past and I think that says a lot about our program”, said Cyclone coach Matt Campbell. “Any bowl game is a way to finish 2019 but it can also be used to springboard yourself into 2020.”

It marks the second time in school history Iowa State has made bowl games in three consecutive seasons (2000-02).