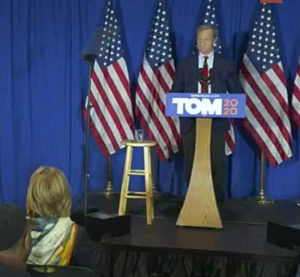 California billionaire Tom Steyer today said President Trump will win re-election if Democrats don’t nominate a candidate who can compete with Trump on the economy.

Steyer, who delivered a speech on the economy today in Iowa City, said unchecked capitalism hasn’t worked, but socialism isn’t the answer. He supports a tax of wealth to address what he calls the unjust distribution of income over the past 40 years.

“How are we going to do the things that we need to do to make sure we’re investing in the American people, investing in their prosperity and therefore our prosperity, so that we can, in fact, build the kind of human capability that’s going to make us actually prosper in the 21st century,” Steyer said during an interview with Radio Iowa.

Steyer is a former hedge fund manager who is worth an estimated $1.6 billion. He argues all income should be taxed equally, whether it comes in the form of a paycheck or from investments — so the tax break for capital gains should end.

“I think Ronald Reagan was the president who came up with the idea that every tax is bad and therefore we don’t need to have revenues to invest in the American people,” Steyer told radio Iowa, “but obviously that’s not true.”

Steyer is proposing a 10 percent income tax cut for lower and middle-income households. Steyer said his ideas would cut taxes for 95 percent of Americans.

Steyer is one of three businessmen in the race. Former New York City Mayor and media mogul Michael Bloomberg is worth more than $50 billion. Andrew Yang has spent his career launching and supporting start-up businesses.