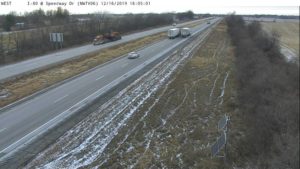 The snow that dropped on Iowa Sunday is not expected to stay around long. The 2.5 inches reported near Centerville in southeast Iowa’s Appanoose County was the heaviest amount — with most of the state seeing just a dusting.

National Weather Service meteorologist, Brooke Hagenhoff, says snow of any depth won’t hold up with what the forecast shows.
“We’re looking at definitely a gradual warming trend the next couple of days — and really through the weekend,” Hagenhoff says. “And we’re not looking to add any snow either. Which is a positive if you are not a fan of the white stuff.”

The forecast covers the next seven days. “Which takes us all the way through next Monday. And as far as temperatures — we are going to see a gradual warming trend by the end of the week — kind of upper 30s to low 40s,” Hagenhoff says. The end of that forecast is two days before Christmas Day.

Hagenhoff says a sneak peak ahead would go against a white Christmas.  “It’s still quite a ways out, it’s beyond our seven-day forecast, but just looking at some of our extended models, it doesn’t look like that will happen. Right now indications are that it will be too warm and we’ll still be dry,” according to Hagenhoff. It is Iowa and that could change.
“We’ll keep an eye on it — but it’s not looking like it will be a white Christmas,” she says.