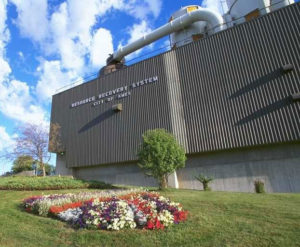 The City of Ames operates the only garbage-to-electricity power plant in Iowa, but trash is being temporarily diverted to the Boone County landfill while the plant undergoes an upgrade.

Don Kom, Ames’ director of electric services, says changes in the composition of garbage caused more wear on tubes in the boiler. The solution is new tubes coated with a special metal alloy which are now in place and being testing.  Kom says, “By the 23rd, we should have it online, tied into the grid, and then we’ll start introducing refuse-derived fuel into the fuel mix.”

The Ames Resource Recovery plant  collects garbage, pulls out glass and cans for recycling, then processes much of what’s left for the power plant. Still, today’s trash isn’t what it was in the 1970s when the plant first went online. “Garbage has changed so much over the years that there are more plastics and by burning plastics it creates a different type of fuel,” Kom says. “It actually has more BTU content but it burns differently in the power plant.”

The system can generate about 40% of Ames’ electricity.

(Thanks to Amy Mayer, Iowa Public Radio/City of Ames photo)