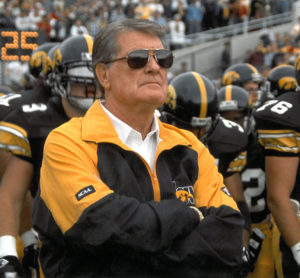 Fry’s family released a statement saying that Fry died with his family at his side following a lengthy battle with cancer.

The statement from the family says “We are proud to know that our father’s life had a positive influence on so many people, the players, the coaches, and the fans who played for, worked with, and supported his long and successful coaching career.

His legend will live forever with the people he touched and inspired, and the programs he led to greater heights. Though Hayden was born in Texas and moved there more recently to be closer to our family, his love for the University of Iowa, his players and coaches, the people of Iowa, and the state of Iowa, is well known.  Hayden often shared, “I’ll Always Be a Hawkeye”.

Fry was announced as Iowa’s new coach in December of 1978 and took over a team that had not had a winning season in 17 years. He turned the Hawkeye program around and made them into a Big Ten Conference and national contender. Fry won 143 football games in 20 seasons, retiring in 1998 while fighting cancer.

Iowa Coach Kirk Ferentz
“Hayden Fry is a college football icon and an Iowa legend. His Hall of Fame career is well known, but personally, he will always be the man who took a chance on me at the start of my coaching career. I was proud to coach with him and honored to succeed him when he retired. He’s been a great mentor and a true friend. I am forever grateful to him.

Mary and I send our heartfelt condolences to his wife Shirley, their children and the entire Fry family. We hope that Hayden’s legacy of integrity and high character will provide his family comfort during this difficult time.”

“He loves energy. He loves passion. He loves guys that can communicate. He had gotten some good recommendations, I don’t know who they were from, from at least a couple people in Iowa City. One of the many things I learned from Hayden Fry: If a young man doesn’t have all the things experience wise that you’re looking for, but he has those other intangibles — work ethic, loyalty, coachable, can communicate, can build relationships, a lot of enthusiasm, a lot of passion and energy for life, could be a good recruiter and a guy that might be a person on the rise — then maybe I’ll embrace him, give him a chance and opportunity, and that’s what Hayden Fry did with me.”

Chuck Long
Iowa quarterback, 1981-85:
“I have to give him all the credit for getting my personal career launched among others. I speak for many of the Hawkeye football past players. He had a special way of making you feel good all the time even in the tough games and in the tough moments. For me it was after an interception. He had a way of getting you back up and confident. That feeling… not every coach has that ability and I’ve been around a bunch of them. Not every coach has that ability to make you feel confident and be positive even in the negative situations.”

Merton Hanks
Iowa defensive back, 1987-90:
“Hayden was always on the cutting edge and looking for the best people, regardless of race, creed, or color. What he did at Iowa, really rebuilding that program to what it was to, quite frankly, national power. To get it to the point where you were able to attract young men from states away, like myself, who may not have known about the University of Iowa and everything Iowa has to offer, speaks very well of not only him, but the University itself and being a partner with him to make the University of Iowa brand that much bigger and better.”