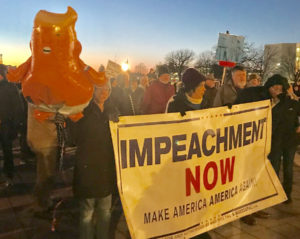 A few hundred gathered near the steps to the Iowa Capitol in Des Moines, chanting and singing songs. Kristin Peyton of Ames came with a hand-made sign.

“I dropped everything to be here,” Peyton said. “I’m here for the people who can’t be here. My kids are taking finals. My other kids are working. Not everyone can come, but I could.”

“We are a laughingstock throughout the world anymore and the damage he’s doing internally and throughout is just going to be so long lasting,” she said, “and no one is above the law.” 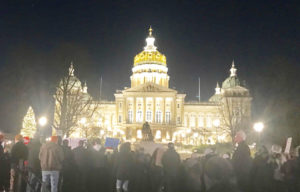 The crowd repeated that six-word phrase — “no one is above the law” — often.  Other chants, like “Wake up, Chuck” and “Joni Ernst, do your job,” were directed at Iowa’s two Republican Senators. Rick Lancaster of Des Moines said there’s “no defense” for what Trump has done — but he expects the Republican senators will not vote to convict the president.

Similar rallies in support of impeachment were held in Red Oak, Sioux City, Cedar Rapids, Iowa City and Davenport. The U.S. House is scheduled to vote on two articles of impeachment on Wednesday. Early this afternoon, the three Democrats who represent Iowa in congress announced they would be “yes” on impeachment.

The Iowa Republican Party’s chairman said Democratic Congresswomen Abby Finkenauer of Dubuque and Cindy Axne of West Des Moines will be voting to overturn the votes of thousands of Iowans who supported Trump in 2016. Finkenauer and Axne were both elected in 2018. Congressman Dave Loebsack, a Democrat from Iowa City who does not plan to seek reelection in 2020, also announced he will vote for the articles of impeachment.