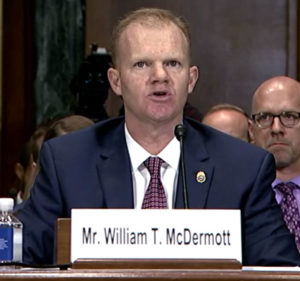 Illinois Senator Dick Durbin is on the committee and questioned how the federal Drug Enforcement Agency determines how many painkillers are produced. He cited a southeast Iowa county as an example.  “Lee County, Iowa averaged 45 opioid pills per person for nearly a decade — dispensed by one pharmacy in that county,” Durbin says, “forty-five opioid pills for every person living in the county for ten years.”

He says the smallest county in Illinois has 4,300 residents and there were enough opioid sent to a single pharmacy there to provide 90 opioid pills for each person each year. Durbin says the effort to reduce the number of available opioids is not enough.

“DEA’s proposed 2020 quotas do not take into account drug addiction, overdoses and deaths. In other words, the form of production quotas don’t look at the reality of worst drug epidemic going on in America today,” he says.

DEA assistant administrator, William McDermott responded that he saw a letter that Durbin and another senator sent asking about the quota. “I can tell you that I sat down with our folks that do quota, and we went over the numbers again. I assure that is a priority for me. And I assure you that is a priority for the administrator to ensure that we have a balanced approach,” McDermott says.

McDermott says they are trying to make adjustments. “If you look at the numbers, I think we’re doing exactly what you asked us to do,” McDermott says. Durbin interrupted, “Eight billion. Eight billion — enough for every adult in America to have for two weeks. You think that is enough of a response in the midst of a drug epidemic?”

Durbin says the DEA has to be on board to help with the opioid crisis in Illinois, Iowa and other states.