You are here: Home / News / Steyer says he’s spending millions because he has something different to say 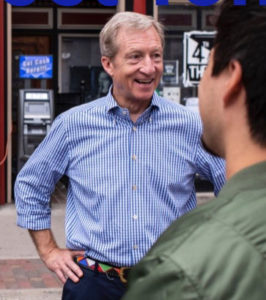 California billionaire Tom Steyer has spent nearly $86 million on advertising since he entered the Democratic presidential race this summer. Some competitors have accused him of buying his way onto the stage for the televised debates.

Steyer told Radio Iowa he “has something different to say” and that’s why he’s spending millions of his own money on the campaign. “I’m not somebody who’s famous and I’m one of the last people to have gotten into this race months after other people,” Steyer said, “so I view it as like what I’m going in this race is what I’ve done for 10 years which is when I htink there’s something really important and wrong in the United States, I put in all my time and all my energy and I spend money to try and correct it.”

Steyer is a former hedge fund manager from San Francisco with an estimated $1.6 billion fortune. He retired in 2012 at the age of 55 and in 2013 he launched NextGen America to register new voters and focus on issues related to climate change. Steyer’s presidential campaign commercials have been running in Iowa since this summer and some Iowans have noticed a bit of bling around his waist.

“I wear a beaded belt from Kenya,” Steyer told Radio Iowa. “The reason why I wear it is partly because I really like it and I think it’s really pretty, so it’s fun for me to get up in the morning and put on something colorful and fun.”

Steyer said the multi-colored belt is also a reminder of his visit to schools in Kenya that were established just for girls.

“Actually giving girls the chance to go to school at least through high school changes everything in a country,” Steyer told Radio Iowa, “and it has dramatic impacts in ways that people don’t understand and really, if I may use the grandiose expression, save the world.”

“If you get the sense that I’m a creature of habit, maybe I’d have to plead guilty. I love color,” Steyer said of his red tie and multi-colored belt. “…I like to have bright things around and get going in the morning with kind of a spring in my step and a sense of fun and joy.”

Steyer will be wearing that tie and belt at Thursday’s televised debate among the candidates.

“I think we’re in a new stage where voters, citizens are getting a lot more serious,” Steyer saod.

Steyer and the other six candidates have promised to boycott the debate at a university facility in Los Angeles if a labor dispute on the campus isn’t resolved by Thursday night. In addition, Steyer has joined those who’ve asked party officials to change the criteria for participating in the next debate in Des Moines — so candidates like Cory Booker and Julian Castro who haven’t met the fundraising or polling thresholds may participate.