You are here: Home / News / Warren reacts to Obama’s remarks about female leadership 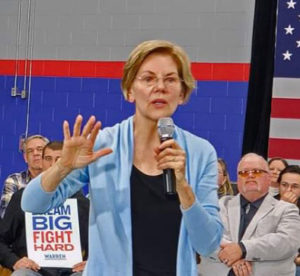 Democratic presidential candidate Elizabeth Warren says a female candidate will not be sidelined in 2020 merely because voters cannot imagine a women in the Oval Office.

“I remember when people said, particularly the pundits, Barack Obama couldn’t be elected president,” Warren said in Ottumwa. “…You know, it’s like a lot of things. It doesn’t happen until it happens.”

Warren just wrapped up three days of campaigning in southeast Iowa. At an event in Ottumwa, a woman in the crowd from Centerville noted women leaders have been elected in Finland, Great Britain, Germany and India, but not the United States.

“I’m wondering why so many Americans — because I hear it from people that are my friends and others that have different viewpoints than me — would rather see a man with a tie,” the woman told Warren.

Warren responded: “So, I’ll tell you the best way to fix this problem is to elect a woman president.”

Warren has been telling crowds that women’s voices were activated by Donald Trump’s 2016 victory and she says elections in 2017 and 2018 show women can win all around the country. Speaking to a crowd in Fort Madison last night, Warren acknowledged many Democrats were “rocked” by Hillary Clinton’s 2016 defeat and Warren said she “felt the world change” when Trump took office in January of 2017.

“I got up the next morning and I went to the largest protest rally in the history of the world, the Women’s Marhc,” Warren said. “…When women and friends of women came to that march and said: ‘We will raise our voices. We will be heard.’ And you felt the world move again.”

“(Obama) said: ‘Now, women, I just want you to know you’re not perfect, but what I can say pretty indisputably is that you’re better than us men,” a man named Joe said.

Warren went on to say she’s sure Obama did not intend to take a dig at any specific men, including those in the presidential race.

This morning, Warren has released proposals she says will root out what she calls the “global flow of dark money.” She’s proposing new disclosure requirements for real estate purchases. Warren is also calling for making it a higher priority to prosecute bankers, lawyers and accountants caught in money laundering or creating shell companies to avoid taxation.