You are here: Home / News / King says President Trump had no political motive in seeking investigation of Biden 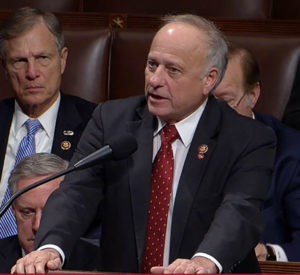 Republican Congressman Steve King says Democrats began planning to impeach Donald Trump on November 9th of 2016, the day after Trump was elected president. King had a brief turn at the microphone today as the U.S. House debates article of impeachment.

“I was Donald Trump that was following the law that said you have to ensure that there’s not corruption here before this money is handed over,” King said.

King began his 90-second speech by accusing Democrats of using impeachment to obscure the actions of Hillary Clinton and President Obama.

“This is the largest, most massive cover-up of such a list of crimes against our country,” King said.

“Joe Biden was not the opponent of Donald Trump,” King said. “He’s in a 21-way primary for Democrats and he’s running third (in Iowa) in that race. (Biden’s) opponents are the other 20 Democrats. How would anybody dig into that mess of 21 people and decide he’s going to go overseas and pull something like this? You have to assign him a motive.”

King argued Trump had no political motive to request an investigation of Biden.

House Speaker Nancy Pelosi opened today’s debate by saying it is tragic that Trump’s actions left Democrats with no choice but to pursue impeachment. Members of the House have been giving speeches of between one and two minutes this afternoon. A House vote on the articles of impeachment is expected early this evening.