You are here: Home / Education / Mt. Vernon school whooping cough cases appear to be dropping off 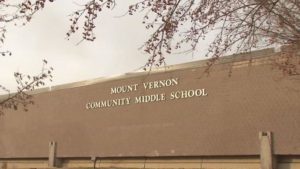 The superintendent of the Mount Vernon School district says it appears an outbreak of outbreak of pertussis, better known as whooping cough, is winding down.

Superintendent Greg Batenhorst told KCRG TV he first became aware of the outbreak in late October and there have been nearly two dozen students diagnosed.  “Once we became aware, obviously our first contact was with Linn County Public Health, talking with them through the proper guidelines, then getting the students on the proper medications and then being out for a five-day period,” Batenhorst says.

Meador says anyone diagnosed should be treated with a five-day course of antibiotics before returning to school or work. Those without treatment should stay isolated for 21 days when they are no longer contiguous. “For anyone that is diagnosed with whooping cough, we do follow-up with that family, find out who those close contacts are and then we work to make sure anyone that may need to have prophylactic treatment is taken care of and gets the treatment,” Meador says.

Meador also said the Mount Vernon outbreak was isolated, and she is not aware of it being a problem in other parts of the state.