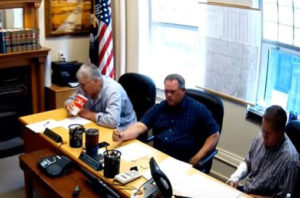 Mike Stensrud is on the left during the supervisors meeting prior to his arrest.

A Winnebago County supervisor has pleaded guilty to charges after bringing a gun to a meeting and being drunk.

Sixty-three-year-old Michael Stensrud of Lake Mills pleaded guilty to the charges of carrying a firearm while under the influence and public intoxication. Stensrud was charged on May 21st after law enforcement was called to the Winnebago County Courthouse in Forest City for a man who was possibly intoxicated.

Stensrud was at a supervisors meeting at the time, with officers saying he smelled of alcohol and had a pistol in his right pocket. Court documents state that Stensrud’s blood alcohol level was above the legal limit. Stensrud had a request to have his trial moved out of Winnebago County denied, then agreed to plead guilty as part of a plea deal in which prosecutors would recommend a deferred judgment and six months probation.

Under the terms of a deferred judgment, if he completes the terms of his probation, the conviction would be removed from his record. Stensrud is scheduled to be sentenced on January 24th.

Stensrud, who played football at Iowa State University before going pro, was in the NFL for a decade before retiring in 1989.