You are here: Home / Education / ISU grad had a winding journey to finally get her degree 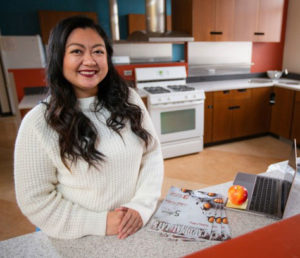 A high school dropout from Des Moines who had her first child at age 14 and a second at 15 is among the 2,200 students who will be graduating from Iowa State University this weekend.

Manichanh Naonady  says she quit school to go to work full-time to support her family and never dreamed she’d someday earn a college degree.  Naonady says, “It is absolutely insane and I think I’m insane for doing this but I’m happily insane, if that makes sense.”

After earning her GED, Noanady enrolled at Des Moines Area Community College to become a nurse, but shifted gears and eventually earned an associate degree in marketing. Now, at age 30, she’ll be adding a bachelor’s degree in journalism and mass communication from ISU to her resume.

“Every time I do take a minute to step back and just look at everything I’ve done, if you would’ve told teen-parent me that I was going to be in this situation today, I’d be like, ‘You’re lying,'” Naonady says, “but at the end of the day, I need more than just being someone who’s just working.”

In the past two years, Naonady has been a food science reporter, recipe developer and podcaster for the Iowa State Daily and a writer for Ethos magazine. She also brought back to life an archived magazine, Cardinal Eats, serving as editor-in-chief. After graduation, Naonady will be looking for a position at a food publication.

“I amaze myself and I just can’t believe that I’ve gone so far as I have because I just never thought this ever would have happened,” Naonady says. “It’s been an insane ride.” She encourages other non-traditional students to follow their passion — as she did.

ISU will honor an estimated 2,231 graduating students during two commencement ceremonies this weekend in Hilton Coliseum.