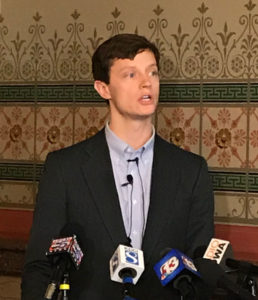 A special investigation released today by the State Auditor’s Office has concluded an employee improperly collected at least $1.8 million from the Des Moines-area Metro Waste Authority.

“No one else at MWA was familiar with any goods or services provided,” Sand said at a Thursday afternoon news conference in his statehouse office.

The auditor told reporters Dwork personally collected the checks written to the shell company rather than having them sent through the mail. According to the auditor, Dworek claimed it was his wife’s company and Sand said that violated the Metro Waste Authority’s conflict-of-interest rules for its employees.

“Invoices for the work contained descriptions of things that Mr. Dworek was already receiving his regular salary for doing,” Sand said. “In essence he was getting a salary to do the work and then submitting invoices as a company owned by himself, describing the same work that he was already getting a paycheck for.”

In addition, Sand said the agency never sought bids for the work Dworek claimed to be doing. Sand suggested legislators should consider requiring cities, counties and other local government entities — like garbage collection services — to have competitive bidding for contract work.

“Obviously a good way to protect taxpayers,” Sand said during the news conference.

The auditor told reporters it’s “reasonable to assume” Des Moines area Metro Waste Authority customers were overcharged. Sand indicated FBI agents as well as auditors from his office have been investigating this case.

The auditor told reporters Dworek resigned in May of 2017 after being confronted by the agency’s new leader. The Metro Waste Authority’s executive director said in a written statement that Dworek devised an “elaborate scheme” to defraud the agency, but it appears he acted alone.

Sand told reporters Dworek had relocated to the Nashville area. Radio Iowa’s attempts to reach Dworek through social media or by phone for comment were unsuccessful.