You are here: Home / Human Interest / Cremation continues to gain ground on burial as end of life choice (audio) 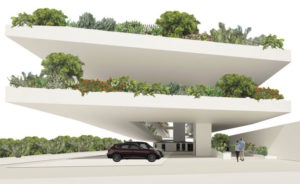 Researchers at Iowa State University say there’s a national shift in how we want our bodies treated when we die — and how our loved ones mark our passing.

More of us are choosing cremation over burial, and celebration of life services over funerals. Professor Lee Cagley, chair of ISU’s interior design department, says it’s an unsustainable model for cemeteries to be like big parks filled with trees.

“The ability to provide a broad expanse of grassy turf that your loved one could be buried in comes at a colossal price,” Cagley says. “There’s thousands and thousands of dollars that’s spent every month just watering dead people, so to speak.” Cagley posed a project for his graduate students to offer design suggestions for graveyards and funeral homes of the future — which take into account changing weather patterns as well as changing social norms.

“The industry has been a little slow to adapt,” Cagley says, “but now, with the clear impacts of climate change, it’s become a rallying cry that they’re actually taking the lead and reexamining what kind of burial practices would be appropriate for the family of the future.” 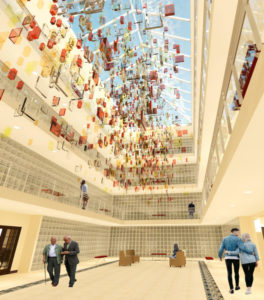 One student designed a sort of vertical cemetery that looks something like a park built on a parking ramp — a slowly-inclining space with burial spots along the way. Another student envisioned a three-story “library” that includes niches on each level to inter cremains, while creating a space where family and friends can stay and reminisce. The names of those who’ve passed would be etched on pieces of colored glass, suspended from the ceiling as a centerpiece.

Cagley says we’re in a transitional period of time where the ideas of Generation X are giving way to those of Generation Y.
“Generation Y is a lot more accepting of death as a part of life and therefore, not spending so much time and energy mourning the loss of a loved one or a friend as they are celebrating the legacy of them,” Cagley says. “That trend is definitely reflected in the way that funeral practices are happening for the loss of let’s say mom or grandmother.”

The works of Cagley’s interior design students are on display at the Ames campus in an exhibit called “Dearly Departed.” While locals may not be flocking to see it, he says professionals in the funeral industry are very interested, especially those from the southwestern U.S.

“Because desert landscape is essentially quite fragile, it is actually a difficult problem,” Cagley says, “trying to help survivors deal with what they think is a dignified end will require a lot of experimentation in the industry.”

This year’s nationwide cremation rate is projected to be near 55%, with only 39% chosing burial. By 2040, it’s forecast the gap will broaden to nearly 80% cremation and about 16% burial. In the southwestern U.S., Cagley says 75-to-80% of people who die already chose cremation.