You are here: Home / Agriculture / Iowans made last-ditch RFS pitch at White House 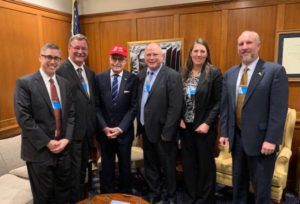 A northwest Iowa farmer who was at the White House earlier this week says he’s disappointed President Trump has failed to uphold the renewable fuels deal he agreed to in September.

“It is pretty upsetting to American farmers and rural America,” said Kelly Nieuwenhuis, a farmer from Primghar.

Nieuwenhuis and four other Iowans met with Larry Kudlow, the president’s top economic adviser, on Tuesday and Kudlow provided a briefing on the EPA’s final decision on the ethanol production mandate.

“We knew right away that this wasn’t the deal that was promised,” Nieuwenhuis said.

Nieuwenhuis was at the White House with representatives of the Iowa Corn Growers and the Iowa Renewable Fuels Association. Nieuwenhuis said the group made it clear to Kudlow the EPA’s 2020 biofuels blending requirements are “woefully inadequate.”

“He didn’t understand. He couldn’t figure out why we wouldn’t be happy with this deal,” Niewenhaus said, “and we just basically told — or I did — that, you know, for us to put the word trust and the EPA in the same sentence was not possible.”

Nieuwenhuis said Iowa Senator Chuck Grassley set up the meeting with the president’s economic adviser, so the Iowans could make a last-minute pitch for changing the EPA’s plan for ethanol and biodiesel.

“We were firm with him, yet respectful,” Nieuwenhuis said. “…But you know this wasn’t the certainy of the deal that we had with the deal that they made with Senators Ernst, Grassley and Governor Reynolds and the ethanol industry.”

“Again we feel the oil industry took charge of the situation and pretty much forced the hand of our leaders and made then lean their way with the ruling,” Nieuwenhuis said.

Nieuwenhuis is chairman of the board of Siouxland Energy. The ethanol plant in Sioux Center shut down for a few weeks, but has been running this fall at about half its normal capacity.