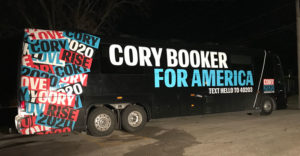 Half a dozen Democratic presidential candidates will be campaigning in Iowa this weekend.

Cory Booker kicked things off Thursday night. As seven other candidates debated in L-A, Booker visited one of his Iowa campaign’s call centers.

“I just want to thank every body here in the holiday season,” Booker said. “…The spirit that you all embody, may this be the spirit that wins in Iowa.”

Amy Klobuchar, Elizabeth Warren, Joe Biden, Pete Buttigieg and Michael Bennet will also campaign in Iowa over the next few days. Yesterday, Booker’s campaign team spent five hours wrapping a bus in Booker’s logo and stickers with the names of people who’ve donated to the campaign.

“The way you win in Iowa is on the ground, organizing,” Booker told reporters last night. “It’s not the person with the most money or TV ads. It’s the people with the best organization, the best precinct captains, caucus-goers. We have a strategy that we have a lot of confidence on and it’s only getting stronger as we get closer.”

The Iowa Caucuses are 45 days away. Klobuchar is kicking off an Iowa bus tour today, too, with an event in Mount Pleasant. Klobuchar plans to stop in 27 Iowa counties by mid-morning on Monday.

Biden plans to campaign through southern Iowa on Saturday and Sunday, with a final stop in Perry. Buttigieg will be in Perry, too, on Sunday, with events in two other cities Sunday. He’s be in central Iowa Monday.

Warren has events scheduled in North Liberty and Cedar Rapids on Saturday.

Bennet, the Colorado senator who’s recently focused his campaign on New Hampshire, will campaign in eastern Iowa on Sunday and Monday.