You are here: Home / News / Warren urges Iowans to focus on approach to fundraising 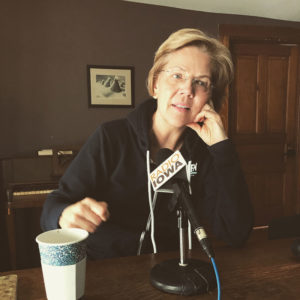 Warren spoke with Radio Iowa between campaign stops in eastern Iowa today, extending her criticism of rival Pete Buttigieg that she first made during last Thursday’s televised debate. Warren did not mention Buttigieg by name during Radio Iowa’s interview, but she suggested a candidate’s money-raising abilities shouldn’t be a concern for primary and caucus voters.

“If the 2020 November General Election is just a bunch of Donald Trump television advertising versus a bunch of Democratic television advertising, we have no comparative advantage. Everybody can do the slick TV ads — right? — and claim whatever they want to claim and hit the airwaves. And, frankly, there’s going to be plenty of money to do that once we have a Democratic nominee. That’s not going to be an issue,” Warren said. “What is going to be an issue is: Where do we build an advantage? And that’s a grassroots movement.”

A debate on this topic among partisans on Twitter today has included references to an Associated Press account of a Warren fundraiser in 2018. Donors who gave at least a thousand dollars were given a bottle of wine as a souvenir of the evening. Warren was running for re-election to a second term at the time.

“I was in a race against a Republican. It was not in the primary,” Warren said. “But it’s also I was new to politics and I had a chance to see what everybody else in this Democratic race has seen that rich people have different priorities than everyone else and they want a chance to be able to push their priorities.”

Warren as a presidential candidate is not meeting with high-dollar donors in small groups or at large events, a decision she often touts during campaign speeches. Warren told Radio Iowa the 2020 race gives Americans a chance to end the corrosive influence of money on the political system.

“This question of how campaigns are funded and who you’re spending your time with is exactly about prosecuting the case against Donald Trump,” Warren said. “Look, he was just impeached. And what’s really at the heart of both his impeachment and what’s been going on for three years? It’s corruption.”

During Thursday’s debate, Buttigieg suggested the party’s 2020 nominee cannot afford to give Trump a fundraising advantage by voluntarily limiting how they raise campaign contributions.