You are here: Home / News / Biden says there’s ‘nothing to celebrate’ in Trump’s impeachment 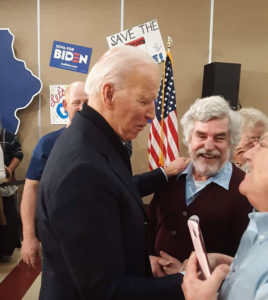 Former Vice President Joe Biden made stops in Ottumwa, Creston, Atlantic and Perry this weekend, promising a return to normalcy and emphasis on national unity if he’s elected president.

“You all reflect what the nation needs most — I mean just basic, simple decency,” Biden said on Sunday. “And I think people are so hungry for a return a sense of decency in our leadership in this country.”

Biden told the crowd in Atlantic there’s “nothing to celebrate” now that the country faces another impeachment drama. Biden called the House vote on impeachment a sad moment for the country, but Biden said President Trump brought this situation on himself.

“As a matter of fact, there’s information…released where within 90 minutes of his phone call with the president of Ukraine (Trump_ had a memo sent to make sure that all aid was cut off,” Biden said. “…He was worried (Ukraine’s president) wouldn’t follow (Trump’s) request to tell a lie about me and my family and about Hillary and other things that just simply weren’t true.”

Biden suggested the way to end gridlock in Washington is to strike compromises that both Republicans and Democrats can support.

Biden for months has been telling Iowa audiences he doesn’t buy into the school of thought that the opposing parties can’t collaborate.

“I refuse to accept the proposition that we’re going to be permanently at war with one another in this country instead of being able to work together,” Biden said in Ottumwa on Saturday.

Biden rejected the idea he’s being “naive” to tout the prospect for unity. Biden says the only way to eliminate GOP roadblocks on key Democratic Party priorities like health care is to reach compromise with Republicans.