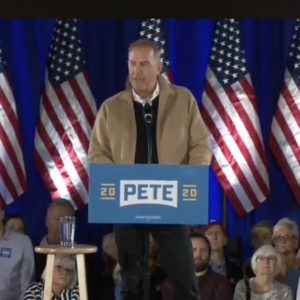 The actor who starred in a classic baseball movie based in Iowa came to the state this weekend to make a political pitch.

“I did not fly out here to tell you what to do or who to vote for. I came out to tell you who I’m voting for,” Kevin Costner, standing on stage at a Pete Buttigieg event in Indianola, Iowa, early Sunday afternoon, said at the start.

He only indirectly mentioned the “Field of Dreams” — the hit 1989 movie that was filmed in the Dyersville and Dubuque areas in 1988.

“This has been a really sweet place for me, this state.” Costner said before telling the crowd of more than 1200 that he’s a registered independent.

“Neither party owns my vote. They don’t get it automatically,” Costner said, to applause. 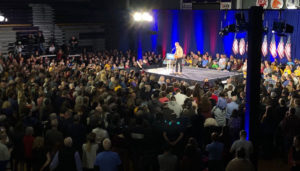 Costner said we have become a nation in “perpetual crisis” and after endorsing Barack Obama in 2008, he’s returned to the political stage to publicly back a White House hopeful.

“Moral courage speaks with a certain clarity,” Costner said. “…It’s our job to listen and not get fooled.”

Costner never mentioned President Trump by name during his 12-minute speech. Costner didn’t say the last name of the candidate he endorsed, either, merely referring to him as “Pete.”

“He won’t compete to be the loudest. I won’t see his arms flapping,” Costner said and murmurs rose from the crowd, “…and he doesn’t have to yell.”

Costner closed by saying Americans get a chance to “hold the course” or “demand something better” every four years.

“That power, that awesome responsibility originates here on the ground in Iowa. What you do with your vote is to put those first seeds in the ground and see what grows next year,” Costner said. “There’s a chance to come out of Iowa with a path lit and the way cleared toward a future that we are done waiting for…It wouldn’t be my place to tell you what to do with this chance. I just want to invite you to listen with me and see if you hear what I hear.”

There are just six weeks left before Iowans head to the February 3rd Caucuses and Costner’s Sunday afternoon endorsement event comes as candidates compete for attention over the holidays. Olympic gold medalist Michele Kwan was here last weekend on behalf of Joe Biden and two weeks ago movie star Rosario Dawson was here to campaign with her boyfriend Cory Booker.