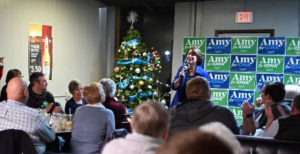 “I went all the way from Hollywood Hills to Mount Pleasant,” Klobuchar announced in a video posted on Twitter.

Klobuchar has been emphasizing her performance in last Thursday’s candidate debate in LA. On Saturday, Klobuchar told an audience in southwest Iowa that she wants to debate Trump next fall and compare the trust money Trump inherited with her grandfather’s legacy as an iron ore miner in Minnesota.

“He saved money in a coffee can in the basement to send my dad to a two-year community college,” Klobuchar said. “That was my family’s trust.”

Klobuchar’s bus logged about a thousand miles when it reached her last event Sunday night in Cherokee. With stops in towns as small as Diagonal, with a population of 324, Klobuchar said the trip illustrates that her party must go everywhere to seek support. 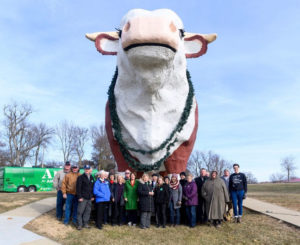 “You meet people where they are, that you don’t abandon the rural parts of our country,” Klobuchar said, “…that you don’t suppose who they’re going to vote for.”

Klobuchar has emphasized a number of her policy positions during her weekend tour, like her call to boost federal spending on infrastructure and her support of importing less expensive prescription drugs from Canada. Klobuchar also emphasizes the importance of “winning big” and ensuring Democratic candidates for the U.S. House and Senate win victories in 2020.

“What I want to do is keep the House of Representatives strong, but also win back the Senate and send Mitch McConnell packing,” Klobuchar said, to applause in Denison.

Kentucky Republican Mitch McConnell — the senate’s majority leader — is up for re-election in 2020. Klobuchar admits she’s racing to personally connect with as many Iowa voters as possible before the Senate reconvenes in January. She faces the prospect of sitting for days in the senate chamber — as a juror in President Trump’s impeachment trial.