You are here: Home / News / It’ll be warm, not white this Christmas in Iowa 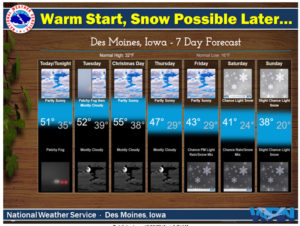 If you are dreaming of a warm Christmas — your dream is going to come true.

National Weather Service meteorologist Brooke Hagenhoff says temperatures in the 50s will be the norm the next couple of days. “We got a little taste of it here this weekend with some 50s and that will continue at least through midweek here — Wednesday at least until Thursday — and then things will start to cool off again,” Hagenhoff says.

The forecast is calling for a high in the mid 50s on Christmas day.
“It’s pretty unusual. Normal highs for this time of year are generally in the low 30s. The record high — at least for Christmas Day in Des Moines was 38 — and that was in 1936,” according the Hagenhoff.

She says a small area in the far northern portion of the state is the only place that might not see the 50’s. “While we’re not quite going to get to those record highs — we are certainly much warmer than normal. It’s pretty rare to be this warm around the holiday season.”

Temperatures toward the end of the week will fall a bit and there is a chance for some snow. She says the system will hit late this week into the weekend and drop temperatures closer to normal, which could include a little bit of snow or rain. Hagenhoff says the precipitation mix could hit right around the time people are heading back from Christmas visits.

One thing she is sure of, those who procrastinated in their Christmas shopping won’t have to worry about going out in wintry weather. “Any last minute shopping runs that people need to make should have excellent weather for that,” Hagenhoff says, “Nice and warm and dry.” But those who like a White Christmas will have to wait until next year.