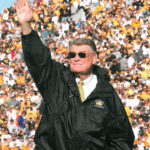 Iowa will honor former coach Hayden Fry by removing the Tigerhawk logo from their helmets in Friday’s Holiday Bowl against USC. Fry died last week at the age of 90. He was responsible for introducing the logo prior to the 1979 season. It is now used by all Hawkeye athletic teams.

“I talked to the family and we are all in agreement it would be a nice thing to just take the Tigerhawks off of our helmets on both sides”, said Iowa coach Kirk Ferentz. “It is just a big loss for everybody in the state of Iowa.”

Fry led the Hawkeyes to three Big Ten titles and three trips to  the Rose Bowl in two decades as head coach.

“We are going to recognize coach Elliott with a sticker on the back of our helmet that will say Bump on it”, added Ferentz. “That has been in the works for a couple of weeks.”