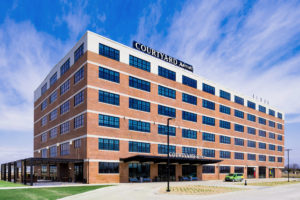 A hulking, vacant John Deere tractor factory in Waterloo that was built in 1947 has been saved from the wrecking ball and transformed into an upscale hotel.

Originally called the C2 Building, the six-story structure is now a Courtyard by Marriott.

Michael Morain, at the Iowa Department of Cultural Affairs, says the project has won on a top historic preservation award from the state of Iowa.

Morain says, “It was an opportunity and a challenge for the architect to come in and figure out how to turn this empty brick box into a stylish, swanky hotel for modern guests.”

It’s unusual for Marriott to convert a historic property but Morain says the company saw an opportunity to open a high-end boutique hotel in an area of Waterloo that was being overlooked.

“If you get a chance to walk in, it feels like an old building,” Morain says. “You can immediately see the historic elements, but it also feels like a modern, stylish hotel that is polished and has all of the creature comforts that guests are used to.”

Davenport developer Rodney Blackwell worked with the state and with Marriott to preserve the 200-thousand square foot building, which had been vacant for years, and give it new life.

“One cool solution the architects came up with, on each floor, there were lots of windows to let in light but the windows were too high to see out of, so they raised the floor,” Morain says. “On each floor, they built false floors which let people see out those windows, but those raised floors also provided space to hide all of the wires and ductwork and things.”

Residents all across Iowa are encouraged to take a closer look at their local history and consider ways to repurpose old buildings instead of knocking them flat.

“So often we find that the easier, quicker solution might be to bulldoze down and build new,” Morain says, “but there are all kinds of examples of communities in Iowa that have rallied around historic properties and turned them into anchors for arts and culture and vibrant gathering places.”

The Iowa State Historical Society says the project displays one of the best, recent examples of historic preservation in the state.