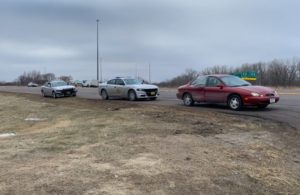 A man is in custody and faces charges that include attempted murder after a traffic stop on Highway 75 on the east side of Sioux City Thursday.

Trooper John Farley says it started when a trooper pulled over a man near the city’s wastewater treatment plant. He says a passenger in the car had an active warrant against him and the trooper tried to take him into custody and the man resisted.

The trooper fired a taser that temporarily incapacitated the man. But Farley says the man — identified as 27-year-old Anthony Walls of Omaha recovered and took off running. He fired two shots at the trooper.

Sioux City Police Chief Rex Mueller was able to find the man.  Mueller says he saw Walls in a ravine and he and a detective were able to safely take him into custody and recover a gun. It took just one-half hour to capture Walls and Mueller credits the fast response of the various agencies for the quick capture.

“We were able to close off residential areas — we essentially set up our perimeter to keep the suspect contained in the wooded area. We did not want him getting anywhere where he had access to the public or homes and we sealed that up very quickly, and our perimeter worked very effectively,” Mueller says.

The state patrol says Walls was wanted for domestic assault on a pregnant woman. Both Walls and the driver were taken in for questioning and Trooper Farley says Walls will be charged with several counts — including attempted murder.