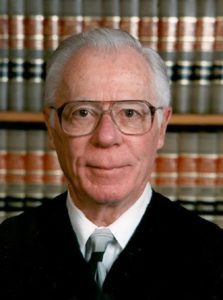 Snell was an Ida Grove native who served on the state’s high court from 1987 until his retirement in 2001. He got an undergraduate degree from Grinnell College in 1951 before joining the Army, Snell earned his law degree from the University of Iowa in 1956.

He practiced law in New York City before returning to Iowa and serving as assistant Iowa Attorney General. Retired Supreme Court Judge Mark McCormick says Snell was one of the first appointed to the Iowa Court of Appeals when it was created in 1976. Snell served on that court until his appointment to the Supreme Court.

(Photo courtesy of the Judicial Branch)