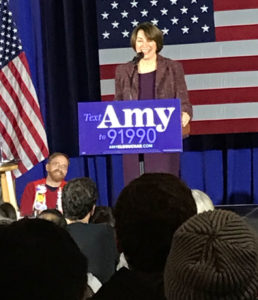 “I made this promise to visit all 99 counties before I may knew just how far apart some of them really were, but the point of this is you should learn something about me: I kept my promise,” Klobuchar said, to applause aned cheers. “More than that, it was a statement of purpose for me and that is believe we need someone for president who’s going to be the president for not half of America, but all of America.”

Klobuchar argued her record in passing bills as a U.S. Senator shows she can do the “unglamorous work” of striking compromises to advance key policies, but she also emphasized the need for the next president to make a rhetorical shift.

Klobuchar was introduced by Andy McKean of Anamosa, a long-time state legislator who switched from the Republican to Democratic Parties this spring, and by long-time teacher Ruth Ann Gaines of Des Moines, a legislator who’s one of a handful of African Americans serving in the Iowa House. Both have endorsed Klobuchar.

“The two different parts of this state that they’re from shows the kind of coalition that we are putting together, not just to win in Iowa and do well in Iowa, but to win in this country,” Klobuchar said.

Klobuchar drew big cheers from tonight’s crowd when she mentioned the Affordable Care Act and called for a “return to sanity” in U.S. foreign policy. Klobuchar delivered a 30-minute speech, sketching out some of her ideas for addressing mental health care needs and the high cost of prescription drugs.

Klobuchar closed by telling the crowd she’s a progressive with a practical streak.