You are here: Home / News / Soggy weekend predicted as large storm moves in 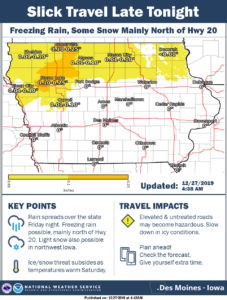 A large storm system is expected to push into the state tonight, but National Weather Service meteorologist Brooke Hagenhoff says it won’t bring the normal ice and snow that comes with a winter storm.

“A lot of its going to be kind of in the form of rain. But there is a brief window for parts of maybe far northwest Iowa to see maybe a little bit of freezing rain,” Hagenhoff says up. “Luckily with that,  as we warm up tomorrow, that should transition over to all rain.”

We’ve had the chance to get outdoors in the recent warm weather. She says you’ll need an umbrella is you want to do that this weekend. “We’re really in store for a pretty rainy day through most of the day Saturday into Sunday. Temperatures will start to drop off on the back end of this system and we may see a brief transition into snow maybe Sunday into Sunday night before things move out of the area,” according to Hagenhoff.

She says any snow won’t stick around long. Hagenhoff says the measurable precipitation will be in liquid — not frozen form.
“A lot of the state could see over an inch to maybe up to two inches in some areas — of just rain over the next couple of days through the weekend,” she says.

Hagenhoff says we could be seeing a lot of snow piling up if it weren’t for the warm temperatures. She says the warm weather also will help the ground soak up some of the rain as it is not as frozen as normal and that will prevent some other issues. Temperatures have been above normal in the last several days, including Christmas Day where man cities broke their record highs.