You are here: Home / Outdoors / ISU professor is first to document mating rituals of elusive butterfly 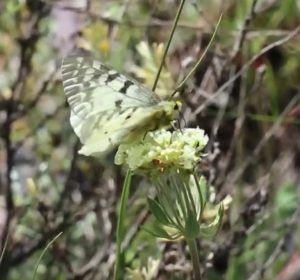 An Iowa State University researcher is the first person to capture the mating habits of a particular butterfly both on video and in photos.

Kim Moss, an ISU professor of art and visual culture, was poised with her camera for the better part of ten days this summer in Grand Teton National Park in Wyoming.

She was watching what the experts call Parnassius clodius. “It’s a medium-sized, yellow-whitish butterfly and it has some red dots,” Moss says. “The female is quite colorful and the male can be a bit more yellow in the head. It’s a beautiful butterfly.”

The male and female of this species mate while flying a few inches off the ground, and afterwards, Moss followed the female as it flitted to multiple plants, but it only laid eggs on two different arrowleaf balsamroot plants. That’s a new discovery.

Moss says, “To come across the female actually laying eggs was a surprise and just a wonderful opportunity to learn this previously-unknown facet about it.” 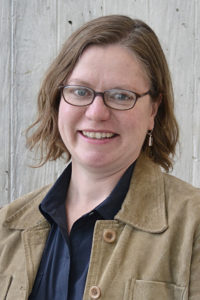 Moss is the coordinator of ISU’s biological and premedical illustration program. She’s part of a team that’s developing a comprehensive educational outreach program about the butterfly, including an iBook and exhibit display.

“I was collecting all sorts of footage so I’m involved in telling the visual story of Parnassius clodius as a bioindicator for climate change,” Moss says. “What’s neat about this butterfly is that it exists in the greater Yellowstone ecosystem but it’s also found all over the world.”

While the species is thriving in the Rocky Mountain regions of the U-S, as well as in Canada and Asia, it’s considered threatened in Poland. Climate change has a host of impacts on the Parnassius butterflies around the world as it’s susceptible to erratic weather patterns, Moss says.

Learning where it lays its eggs is a “huge missing piece of the puzzle” to learn how the butterfly overwinters and is linked to the shifting climate.