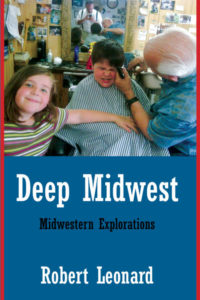 An author who lives in the tiny southern Iowa town of Bussey is offering a tribute to his home state and this region of the country with his new book called “Deep Midwest.”

Robert Leonard says it’s a collection of poems, stories and essays about what it’s like to grow up and live in this part of the world — and it covers a range of topics to which most Midwesterners can relate.

“Farm country is a part of our identity, the weather, personal life, family, faith comes in every once in a while,” Leonard says. “Most of the time, it’s little things that happen around us that I find interesting. It’s the kind of sticky story you end up telling somebody about and I just wrote them down.”

Sometimes it’s those small occurrences than can become important touchstones, even simple gestures like what some might call a “farmer’s wave” from a passing vehicle.

“There’s so many little things in life,” Leonard says. “Have you ever noticed that if you wave first, they’ll wave back the same way? If you just flip your one finger up, they’ll flip theirs. If you wave side to side, they’ll do the same, and if you start waving fast with just your fingers, they’ll pick up their pace. It’s just remarkable stuff that’s all around us.”

Leonard was raised in a farmhouse with no plumbing in a community between Des Moines and Johnston known as Dogpatch, what he calls an “idyllic” place between the city and the country.

While he’s lived in several other states and regions, he decided to return to Iowa to settle down and has found solace in collecting and sharing stories.

Leonard, who earned a BA in history from the University of Northern Iowa in 1977, says life surrounds us with amazing, touching tales every day.

“It’s everywhere, it’s not just the Midwest. This is where I’m writing and these are my observations,” Leonard says. “They’re just fun and sometimes they’re tragic. Sometimes there’s deaths involved, it’s real life. It’s a lot of bars and other kinds of interesting places.”

The book is being published by Ice Cube Press, based in North Liberty, and it’s available at icecubepress.com.