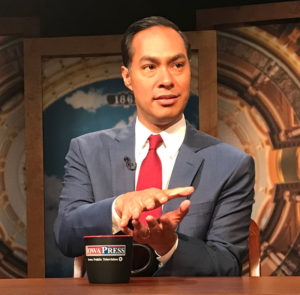 Julian Castro ended his campaign for the Democratic presidential nomination this morning. Castro, who is 45 years old, was the only Latino in the race and early last year he began making the case that Americans are ready for a “new generation of leadership.”

“Having served as mayor of the seventh-largest city in the country, I have a track record of getting things done,” Castro told Radio Iowa in April.

But unlike Pete Buttigieg, the now-former mayor of much smaller South Bend, Indiana, Castro was unable to break into the top tier of candidates. In the closing weeks of 2019, Castro called for changing the presidential selection process.

“There’s no reason that Iowa and New Hampshire, that hardly have any black people or people of color, should always go first,” Castro said in December.

Castro had failed to meet fundraising and polling thresholds to qualify for recent televised debates among the 2020 presidential candidates and would not have been at the debate in Des Moines on the 14th of January.

“My concern is not the presence of any one candidate on the debate stage only,” Castro said in December. “We need to change the whole game.”

Castro released a video this morning on Twitter and said since the Iowa Caucuses are 31 days away and what he called “the circumstances of this campaign season,” he determined “it’s not his time.”