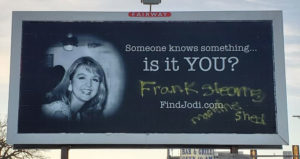 Vandals defaced a billboard in Mason City asking for the public’s help in solving the case of former KIMT-TV anchorwoman Jodi Huisentruit’s disappearance.

The billboard was among three permanent billboards placed throughout the community in June 2018 in an attempt to raise awareness to Huisentruit’s disappearance, asking the question “Someone knows something, is it you?”

The vandalism took place in the last few days, with the words “Frank Stearns Machine Shed” painted in yellow on the bottom half of the billboard. Stearns was a longtime investigator with the Mason City Police Department who worked on the Huisentruit case. He has since retired from the Police Department and currently is employed by Cerro Gordo County as a medical examiner investigator.

The 27-year-old Huisentruit failed to show up for her morning news program on June 27th 1995 and was declared legally dead in May 2001.