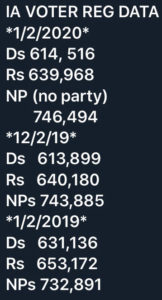 The latest data from the Iowa Secretary of State’s office shows there’s been little change in the number of Iowa voters registering their affiliation with the two major political parties.

The number of Iowans who are registered to vote, but have checked “no party” as independent voters has grown by about 13,000 in the past 12 months, but there are fewer Republicans and Democrats registered to vote now when compared to this time a year ago. Secretary of State Paul Pate has said the January, 2019 data reflects the surge of voter registrations for the 2018 General Election.

If the hundreds of paid staff and volunteers for Democratic presidential candidates who’ve been contacting Iowans this year are identifying new voters, it’s not reflected in the voter rolls as of January 2, 2020. If there are hundreds if not thousands of new, first-time voters showing up at Iowa Caucus sites across the state on February 3rd, there will be long lines at the check-in tables.