You are here: Home / News / Crowds of undecided Iowans take measure of 2020 field 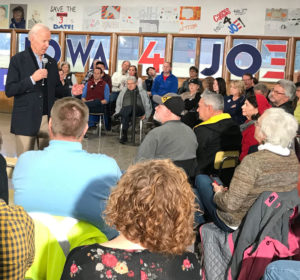 The February 3rd Iowa Caucuses are just a month away and it’s clear many Iowans are still contemplating their Caucus Night choice.

“The number one goal is to get Trump out,” Brenda Bachman said on December 28 as she waited in an eastern Iowa high school lunch room to see one of the candidates.

She and her husband, Marvin Bachman, are undecided voters.

“I’m promising all the pollers that I’ll make a decision in January,” Bachmann said.

Dave Waters of Boone has met all the candidates and said on New Year’s Day that he’d be comfortable supporting any of them.

“I’m not nervous one bit because there are so many good ones,” Waters said.

His brother, Brent Waters of Perry, has sort of settled on a candidate.

“But it could change ’cause I change my mind every day,” Waters said. “They’re all good.” 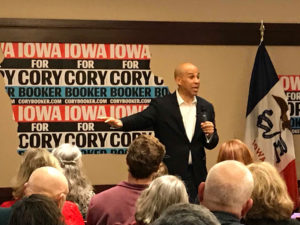 Ray Harden of Perry hasn’t made a final choice yet either.

“It’s going to have to be soon, isn’t it? The Caucuses are creeping up on us,” Harden said.

The Caucuses are 31 days away. Over the holiday, Rachel Boon of Grimes started trying to see the candidates in person, but she’s been reading a lot about the candidates online.

“Higher education’s a really important to me, so I’m interested in student debt, college affordability,” she said, “also looking at income inequality.”

Cedar County Democratic Party chairman Larry Hodgden of Tipton endorsed Kamala Harris in October, but she’s no longer in the race. He said there’s a lot riding on this decision.

“No matter what our big ideas are, no matter what our goals are, we don’t get any of that done without winning the next election,” Hodgden said, adding he believes it’s important for Iowa Democrats to choose someone who can win the White House and lead a General Election ticket that helps Democrats win enough races to take majority control of the U.S. senate.

Fourteen candidates remain in the race for the Democratic presidential nomination. Julian Castro ended his campaign yesterday. Marianne Williamson didn’t drop out, but she laid off all her staff on December 31.