You are here: Home / News / Steyer says Trump taking the world to ‘a scary place’ 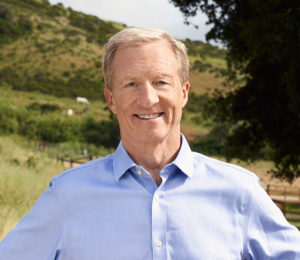 Democratic presidential candidate Tom Steyer today said the Iranian military official killed by a U.S. airstrike was an enemy of the United States, but Steyer says it appears there’s no real plan for what comes next.

“It was also a continuing escalation of the confrontation that Mr. Trump has invited,” Steyer said in Spirit Lake.

Steyer said Trump’s withdrawal from the Iran nuclear deal President Obama had negotiated shows “the basic thesis” of Trump’s foreign policy is confrontation rather than diplomacy.

“We have no allies. We have no values. We have a lot of weapons and we confront everybody,” Steyer said, “except the dictators he likes to hang out with.”

Steyer made his comments to a crowd in Spirit Lake. He was responding to a man in the audience who told Steyer he was scared.

“I think we just blasted our way into decades of terrorism, all pointing at us, and it just befuddles me,” said the man. “…I hope somebody can figure out how to deal with this mess.”

Steyer said diplomacy and working with U.S. allies will make America more safe, but he says Trump’s “America First” doctrine is taking the world to “a scary place.”

President Trump this afternoon said the U.S. “toop action to stop a war. We did not take action to start a war.”