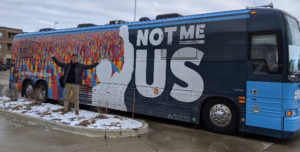 The evolving situation in Iran and Iraq was a key consideration for many Iowans who saw the Democratic presidential candidates who campaigned in Iowa this weekend. Courteney Wolf, a committee caucus-ger from Urbandale, said this may make former Vice President Joe Biden a more attractive candidate to some Caucus-goers.

“I think he’s proven and tested,” Wolf said Saturday night. “I think he’s someone who can go onto the world stage and not have to learn his way, that he knows what he’s doing and that he’ll bring us back to some semblance of sanity.”

“Any further action against Iran requires congressional authorization,” Biden said Saturday evening in Des Moines. “…Congressional leaders have to send a very clear message to the president: ‘He does not have the authority to take us to another war in the Middle East.'”

Bernie Sanders, campaigning in eastern Iowa, said it was reckless for Trump to order the killing of Iran’s top military general.

“This is a dangerous escalation that brings us closer to another disastrous war in the Middle East,” Sanders said. 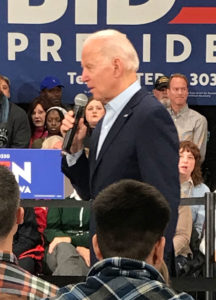 Elizabeth Warren, who also campaigned in eastern Iowa this weekend, said Trump has moved the country closer to war.

“We are not safer today than we were before Donald Trump acted,” Warren said.

But the majority of questions Warren and Sanders fielded during town hall forums in Iowa this weekend were about other topics. In Manchester, Warren used a question from a girl to, perhaps, explain her campaign strategy.

On Sunday morning in Boone, Sanders said his campaign is about pursuing new options that aren’t offered by typical politicians.

“It is asking the American people and the people of Iowa and New Hampshire and Vermont to kind of think outside of the box,” Sanders said.

Sanders told the crowd that being 78 — with a record of supporting concepts like Medicaid for All decades ago — is an advantage.

“It’s not poll tested. It’s not something I came up last year, sitting around a room with consultants saying: ‘What do we do if we run for president?'” Sanders said in Boone. “I’ve been doing this my entire adult life.”

“Amy has congressional experience and has worked on a lot of bills. She’s a hard worker. She has a lot of common sense and she’s not showy,” Allison said, laughing. “I like that.”

Andrew Yang campaigned in southeast Iowa this weekend and will visit Muscatine, Davenport, Clinton, Tipton and Monticello today. Tom Steyer is wrapping up his five-day bus tour of the state. Marianne Williamson, who laid off her campaign staff on December 31, held a yoga-focused fundraiser in Iowa City on Saturday.