You are here: Home / Fires/Accidents/Disasters / Smoke in cockpit forces emergency landing for plane in Atlantic 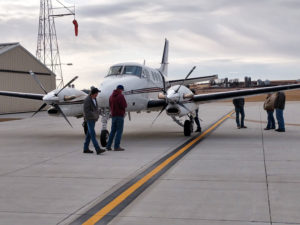 A twin-engine plane made an emergency landing in Atlantic late Monday afternoon after the pilot reported smoke in the cockpit.

Pilot Nick Lambert of Perry talked about what happened after he landed safely with a passenger. Lambert says he had a vent motor burn up on him, so he made an unscheduled landing in Atlantic.

Lambert said they had been out flying all day, and had no previous issues until the were underway on the final leg. Atlantic firefighters inspected the 1985 twin-engine Beechcraft King Air — but could not could not immediately identify the source of the problem. Lambert got on the phone to a mechanic and was able to narrow the problem down to the vent motor.

Lambert and his passenger resumed their flight after being on the ground for about an hour.