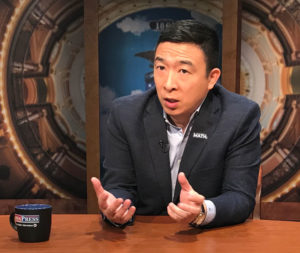 Democratic presidential candidate Andrew Yang says there should be U.S. and international efforts to establish “guard rails” on technology development.

“Kids right now are addicted to smart phones,” Yang says. “…We have some of the smartest programmers in our country turning super computers into dopamine delivery devices for our teenagers.”

Regulations could ensure the labs developing artificial intelligence and robotics aren’t doing something disastrous, according to Yang.

“I am friends with some of the leading technologists in our country and they have said to me that their incentives on things like artificial intelligence are all to go as fast as possible because they’re coming with each other and China,” Yang says. “And so they said, ‘Look, if all of us are just racing at breakneck speed, one of us is going to do something really, really problematic at some point.’ And they actually said to me: ‘We could use some guardrails from government on this.'”

Yang says the U.S. is in a race with China when it comes to artificial intelligence — and in danger of losing as China invests billions in the industry.

“Right now China has developed its own technology ecosystem that it is trying to export to other parts of the world,” Yang says. “We have to make sure that they fail because we do not want a world where everyone is using Chinese software.”

Yang proposes a “World Data Organization” similar to the World Trade Organization, to set standards for how technology and data may be used and penalize countries which violate those international standards. Yang, who is wrapping up a campaign swing through southeast Iowa today, made his comments during taping of the “Iowa Press” program that will air Friday night on Iowa PBS. The video is posted here.