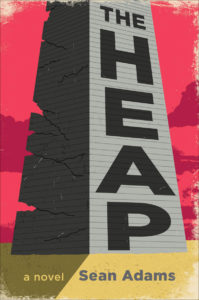 Author Sean Adams says “The Heap” is about a near-500-story skyscraper that was simply too big to stand.

“An enormous building that was basically a fully interior city has collapsed and there’s only one known survivor who is a former radio DJ and the only way they know he survived is he’s buried under the rubble, still broadcasting,” Adams says. “The story follows his brother’s attempt to rescue him and things go awry from there.”

The architectural marvel falls into a huge pile of debris, the Heap, spanning 20 acres of desert as recovery efforts get underway.
Adams says, “There’s definitely a lot of dystopian elements to the book but I don’t necessarily think of it as totally a dystopia.” 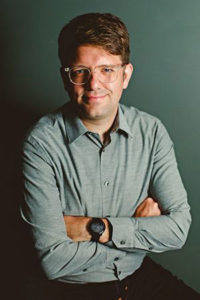 With the success of the “Hunger Games” novels and others, the dystopian genre has gained popularity in recent years, as writers

envision how humanity copes in a post-apocalyptic world.

“It all started with this kernel of an idea of somebody buried underground who can only communicate through the radio,” Adams says. “From there, I built up this disaster. I didn’t necessarily sit down to write a dystopian novel. More like, I started with that little idea and kind of worked from there.”

The 33-year-old Adams is a New York native who lives in Des Moines and is a graduate of the Iowa Writers’ Workshop. Readings are planned at 6:30 tonight at Beaverdale Books in Des Moines and on February 6th at Prairie Lights in Iowa City.