You are here: Home / News / Booker skeptical of intel behind Soleimani decision 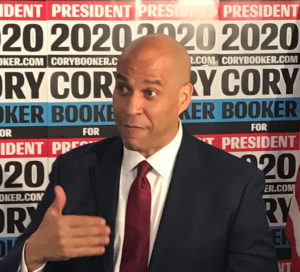 “I”m a member of the Foreign Relations Committee,” Booker said yesterday. :I’m going to go for classified briefings to see if, indeed, this president had a real reason to use military force.”

Trump Administration officials say the drone strike that killed  Iran’s top general was in response to an imminent threat. Trump has also said previous presidents should have killed Qassem Solimani.

“A president has to meet a pretty high bar to engage in this kind of military conflict,” Booker said. “I am very skeptical that he has and I’m pretty confident that he doesn’t have a strategy.”

After Iran’s attack in a US military base in Iraq last night, Booker released a statement. “We are quickly heading to a point of no return in the region,” Booker said. “We must use diplomacy to deescalate and keep Americans safe at home and abroad.”

During an interview with Radio Iowa three hours before Iran’s air strike, Booker said if he’s elected president, he’ll ask congress to rewrite the 2001 resolution that has given Presidents Bush, Obama and Trump authority to use military force in response to terrorism associated with the 9/11 attacks.

“We now see if that a Trump gets elected, too, that’s surrounded by war hawks who are from the very beginning are talking about regime change in places like Iran, leading us into yet another crisis like we saw in Iraq under another president who had war hawks surrounding hin, that those presidents can take an Authorization on the Use of Military Force and lead us down a hole that costs us trillions of dollars and thousands of American lives,” Booker said. “Enough of that.”