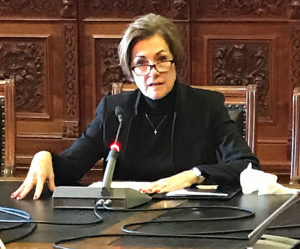 Governor Kim Reynolds says all pending applications from Iowans with felony records who’re seeking restoration of their voting rights will be reviewed before the Iowa Caucuses.

“Right now we have 347 that are being processed,” Reynolds said this morning during a statehouse forum organized by The Associated Press. “Eighty of those just came in (during) the last 30 days. They will be completed before the February 3rd Caucuses.”

Iowa is the only state that still bans all people with felony convictions from voting unless they appeal directly to the governor.

“If individuals are interested in participating in the February Caucuses, they need to get that application in as soon as possible,” Reynolds said, “and we’ll do everything that we can to get them through the process and get them reviewed and give them an answer one way or the other.”

The Iowa Department of Corrections has just begun giving qualified inmates a nearly-complete voting rights application when they’re released from prison. The governor says that will eliminate the background check Department of Public Safety staff have had to do.

“There’s a few variables to that, but for the most part, we’ll be able to skip that,” Reynolds said, “and that will expedite the process quite a bit.”

Reynolds is again this year asking legislators to craft a constitutional amendment that would automatically restore felon voting rights.