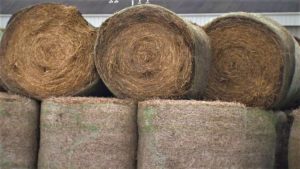 Round bales of hay at Dyersville Sales Company.

The manager of an eastern Iowa auction company says the state is making it difficult for truckers to get much-needed hay into the state.

Trucks transporting hay, straw, or cornstalks are often overweight and Iowa requires a permit for any truckload of hay — which isn’t the case in other Midwest states.

Dyersville Sales Company manager Dale Leslein tells KCRG TV the permits are making it difficult for him to get hay into his auction.

“The trucking industry just won’t deal with it anyhow. There’s too much red tape and too much going through it,” Leslein said.
Leslein said truckers don’t want to pay for these permits. Even if they did, he said truckers are worried they’ll get cited for not having the correct permits.  Leslein said it’s critical to get hay into the state because of a shortage.

“We had a serious winter kill with our alfalfa and the last two years we’ve had excessive rainfall and production has been way down,” Leslein explained. A low supply of hay means the prices go up, and that is passed on to farmers at a time when dairy farmers have already been struggling.

These overweight permits for hay, corn, and straw cost $25. That allows a truck to drive on state roads for an unlimited number of times in one year. To drive on county, and some city, roads, truckers have to purchase permits from those local governments, too.

Iowa Department of Transportation Sergeant Neil Suckow tells KCRG TV the state has given truckers a break by charging $25 instead of $50  for the permit — which is the price for all other overweight loads. “We are trying to accommodate them a little bit with allowing the divisible load when we normally don’t allow any other divisible loads,” Suckow said.

Suckow said the permits have requirements to promotes safety on the road. “Whether they have specific signing, flag requirements, that’s all for other vehicles to be able to identify that there is a bigger vehicle that is coming at them,” Suckow said.

Leslein isn’t sure how much longer his business and farms can last with the permits in place. He says the alfalfa issue isn’t going away quickly. “It’s going to take a couple of years to rebuild our alfalfa stand and get our production back up, you know this nightmare is not going to end anytime soon,” Leslein said. “The best way to help our farmers here in northeast Iowa is to make hay, straw, and cornstalks exempt from the oversized load permits.”

Leslein said the a change would help farmers who are already hurting as they try to supply food.