You are here: Home / Fires/Accidents/Disasters / Dangerous Highway 151 intersection in Jones County near Anamosa could close 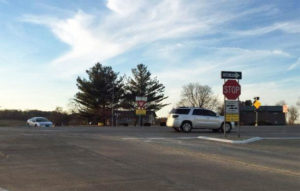 This Highway 151 intersection near Anamosa could be closed.

A dangerous Jones County intersection that has been the site of numerous accidents over the years could be closing.

County leaders have come up with a proposal to close the intersection of Highway 151 and Old Dubuque Road in Anamosa, with a joint public hearing taking place tonight. Jones County Sheriff Greg Graver says they’ve gone over all the accident data.

“It’s by far the worst intersection as far as both deaths and major injuries that we have in this county,” Sheriff Graver says. “There was a lot of talk before — but we all believe not that the data shows there’s going to continue to be deaths and serious injuries unless we take action — and now we are pushing for that action to occur.”

Sheriff Graver says that many deaths and injuries indicate there may be an engineering issue with the roadway. “There’s four lanes of traffic on the southbound side — there’s two turning lanes, two through lanes. It’s on a curve, it’s on a slight downgrade,” Graver explains. ” Even though you try to kind of change some things — you are not going to be able to change the layout of the road or the intersections — so it kind of puts you where you don’t have a lot of options — other than in our opinion is a closure.”

Sheriff Graver says the issue has been discussed by both the Jones County Board of Supervisors and Anamosa City Council, with support from the County Attorney, City Police Chief and DOT. He says most of the public seems to be in favor of making changes at the intersection, but he has also seen some push back about the inconvenience it will cause some residents.

“And we understand that — but at what point is inconvenience worth life or injury? Graver says. The County and City will hold a joint public hearing on the proposal to close the Highway 151/Old Dubuque Road intersection in Anamosa tonight. It will begin at 7 p.m. at the Anamosa library.