You are here: Home / News / Outflow increases at Gavins Point Dam with projections of high runoff 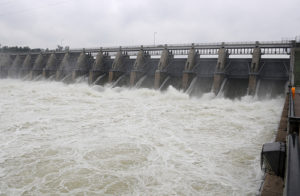 Residents along the Missouri River are hearing repeated warnings of likely flooding in 2020 due to saturated soil conditions from a very wet 2019.

Kevin Low, a hydrologist with the National Weather Service, says the latest 90-day river outlook indicates a high probability for continued or renewed flooding along several of the Missouri River’s tributaries. “For the main stem Missouri River itself, there’s roughly a 50-50 chance for minor flooding to occur in some reaches below Nebraska City,” Low says. “All of this risk for flooding is, of course, dependent on the timing and locations of any plains snowmelt, rain-on-snow events, and just plain rain events.”

The projections are based on several factors, including precipitation expected in the next three months. Doug Kluck is the regional climate services director with the National Oceanic and Atmospheric Administration in Kansas City. Kluck says the outlook for January through March indicates elevated levels of above-normal precipitation across the entire Missouri River basin thanks to heavy rain and snow in the mountains and plains.

“The confidence level in those predictions, or that outlook, isn’t extremely high,” Kluck says. “I’ll say that. We don’t have a strong El Nino or La Nina. We’re not leaning on a lot with these predictions. However, as of this moment anyway, we’re saying above-normal precipitation. Most of that will be snow, as you’d expect, in Montana and Wyoming.”

Heavy runoff from mountain snowpack is also expected to continue. John Remus, chief of the Army Corps of Engineers’ Missouri River Basin Water Management Division, offers assurances to residents in the region. “The Corps remains fully committed to our flood risk reduction mission, protecting stakeholders when we can from significant runoff events that pose a threat to human health and safety,” Remus says. “Floods can and will occur regardless of basin or system conditions, including ice-induced flooding during the winter freeze-in and spring breakup periods, and flooding due to thunderstorms.”

Corps officials say releases from Gavins Point Dam in South Dakota were increased on Tuesday from 27,000 to 30,000 cubic feet per second. Because of the high runoff expected, monthly average releases are expected to range from 33,000 c-f-s during the summer to 42,000 cfs in the fall. Releases will be reduced in response to downstream flooding when appropriate. The National Weather Service will issue its first spring flooding outlook on February 13th.