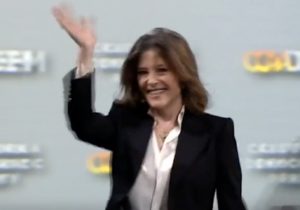 A 2020 presidential candidate who had a yoga-themed fundraiser in Iowa City last weekend has exited the race.

Marianne Williamson laid off her campaign staff on December 31st and has ended her campaign 10 days later. Williamson is a 67-year-old spiritual guru who is the author of popular self-help books.

She had called for the creation of a Department of Peace and gained attention on social media for saying during a mid-2019 TV debate that only love could cast out the fear President Trump was spreading.

Williamson told supporters in an email she would be unable to garner enough votes in this year’s primaries and caucuses to continue spreading her message and she did not want to stand in the way of other progressive candidates seeking votes.

Williamson dedicated a fair amount of campaign resources to Iowa, renting a Des Moines condo for a while after announcing in June she was moving to Iowa to campaign.