You are here: Home / News / First female speaker of Iowa House reflects on her tenure 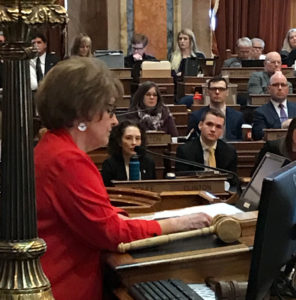 Linda Upmeyer finishes her last duties in the Iowa House.

Linda Upmeyer of Clear Lake closed out her tenure as speaker of the Iowa House this morning.

“This House will be in order,” Upmeyer announced after banging her gavel shortly after 10 o’clock.

Last fall, Upmeyer announced she would not seek re-election to the House in November of 2020 and would immediately step down as the leader of House Republicans for the 2020 legislative session. In October, House Republicans selected Pat Grassley as Upmeyer’s successor and he was installed after a vote in the full House this morning. Upmeyer, though, was able to give one last speech from the speaker’s chair.

“As the first woman to serve as speaker of the Iowa House, I hope that my time has inspired girls and young women,” Upmeyer said. “When you dream big and work hard, nothing is unattainable.”

Upmeyer’s late father, Del Stromer of Garner, was speaker of the Iowa House in the early 1980s.

“Someday, God willing, I’ll have an opportunity to have a discussion with my dad. I’m sure he will be very proud of what we’ve accomplished on behalf of Iowans,” Upmeyer said. “I’m also sure that there will be a couple of things where he’ll say: ‘Girl, what were you thinking?'”

Upmeyer, who is still a voting member of the House in 2020, told reporters she hasn’t lost any sleep about her decision to resign as House speaker.

“From time to time I’ll think of a bill, perhaps, that I was interested in and say: ‘Oh, we didn’t get that passed,'” Upmeyer said, snapping her fingers. “But, you know, I still have this year.”

Upmeyer said it “feels nice” to have a reduced workload now that she’s not in charge of raising money and recruiting candidates for House races.

“I traded cars because I wouldn’t have to put 25,000 miles on my car every year,” Upmeyer told reporters this morning as her husband, daughter and two grandchildren sat nearby on the House floor.

Another former speaker of the House, Kraig Paulsen, is an avid woodworker and he has made a gavel for the new speaker. House Speaker Pat Grassley’s dad cut a limb from a walnut tree on the Grassley family farm near New Hartford for the project.

“It was a surprise to me, so that’s pretty neat,” Grassley told reporters. “We actually have two more (gavels) out of that, so one for each of my children at some point.”

Grassley, who is the grandson of U.S. Senator Chuck Grassley, is predicting his young daughter Reagan — named for former President Ronald Reagan — may follow him into politics.