You are here: Home / News / Jewell trying to raise money to save grocery store 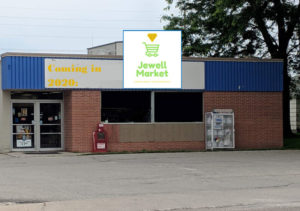 The Hamilton County town of Jewell could lose its only grocery store unless residents are able to band together and purchase stock to keep the doors open.

Sarah Thompson is one of the organizers who called a weekend meeting to offer suggestions on keeping the market from closing.
“What we talked about is becoming community owned, at least in the short term, and selling shares so that we could keep the grocery store alive,” Thompson says.

Jewell has a population of 1,215. If the store closes, it will mean residents will have to drive many miles out of town for their groceries. Keeping the store open, perhaps as the rebranded Jewell Market, is an expensive proposition and $48,000 has already been collected.

“We need to raise at least $160,000 which would give at least a month or two of payroll plus restocking the shelves,” Thompson says. “If we can get that, then we can keep it going long enough where we can figure out how we’re going to keep it going in the long term.”

Heartland Market purchased the former Anderson Grocery in 2018. The Heartland Market chain own stores in small towns across the state, some of which closed last year. She hopes residents weigh their options and choose to invest in the store.

“Some of the other communities that are dealing with this are selling their shares for $2,500 or 1,500,” Thompson says. “A share in Jewell is $400 currently.” There’s a Jewell Market Facebook page with information about the store. Thompson says donations are welcome in any amount.