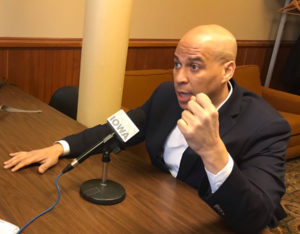 Unlike others who questioned why Iowans should vote first, Booker defended the Iowa Caucus process and had about 100 family members in Iowa who would have been precinct leaders for him. Booker, though, did question the Democratic National Committee’s rules on fundraising and polling position that determine which candidates got to participate in the televised debates.

“A primary debate stage process that works against diverse candidates and allows billionaires to hack the process,” Booker told Radio Iowa during an interview last week.

Booker had not qualified for tomorrow night’s debate in Des Moines. California billionaire Tom Steyer is among the six candidates who will participate. Steyer’s heavy spending on advertising in South Carolina and Nevada recently boosted his polls numbers there.