You are here: Home / Agriculture / Things are shaping up to be a good year for Iowa turkey growers 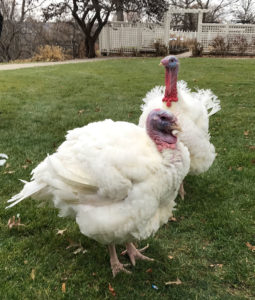 With ratification of the U.S. Mexico Canada Agreement expected soon and the lifting of a ban on U.S. exports to China, Iowa’s turkey producers are expecting 2020 to be a banner year.

Iowa Turkey Federation executive director Greta Irwin says new biosecurity measures are in place at all of Iowa’s 130 turkey farms following a devastating round of avian flu in 2015. “We really work hard to make sure we have clean boots when we go into a barn,” Irwin says, “because that would be the number-one way that you’re going to track in a virus and we are constantly keeping the water clean and healthy and sanitized for the birds here on the farm.”

Back in November, China announced that it was lifting an import ban on U.S. turkey products that had been place since 2015.
“Even our turkey feathers were not allowed to come into China and as you think about turkey feathers,” Irwin says. “You say, ‘Wow what do we use turkey feathers for?’ Well, decorative masks, costumes, feather boas, even fishing lures. China would make those products out of our turkey feathers.”