You are here: Home / News / Another Iowa county wrestles with blow-back over wind turbines 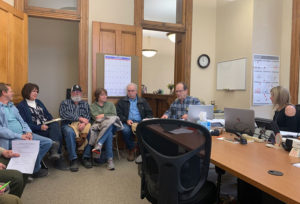 After months of discussion and two public hearings, the board of supervisors in one southwest Iowa county has decided to leave the county wind turbine ordinance as is.

“Whichever way we land, we’ve got people pretty upset and we understand that,” Page County Board of Supervisors chairman Chuck Morris said.

Today’s decision comes after the supervisors held public meetings in both Clarinda and Shenandoah last month to gather feedback on wind turbines in the county. The current ordinance requires there to be 1500 feet between a wind turbine and any home on neighboring property. Supervisor Jon Herzberg said increasing the setback much more would effectively end wind energy possibilities in the county.

“A 1600-feet setback is about the most you can go, otherwise the wind energy company won’t come in,” he said.

The county ordinance does require a setback from non-participating property lines that’s equal to 1.1 times the height of the turbine.